A rather fun knitted beard 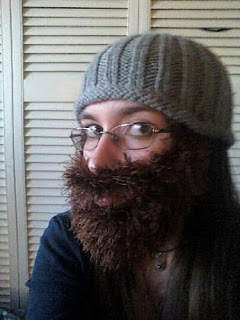 I wanted to make one of those knitted beards you could attach to a knitted hat. I looked around and didn't like any of the patterns, so I came up with my own. I previously had this pattern on ravelry as a post for another beard pattern I considered using but didn't end up using. My sister suggested (several times) that I actually take credit for my own creation, so here it is!


Needle size US 3 - 3.25 mm DPNs
Yarn: less than 1 skein of Lion Brand Fun Fur Solid Brown or the color of your choice.


Gauge: None really. I have a narrow face, but the size I made is big enough seems to fit any size. At any rate this pattern is easily adaptable to any type of gauge and face size you may have and bigger sizes can be made my simply adding on extra stitches to your original cast on. Just make sure it's an even  number!

~Beard~
1) Cast on 22 stitches on to your DPN (keep in mind that you will need a total of 3 needles before this pattern is finished).
2) Knit 2 rows. You can purl if you like, but it really won’t make a difference with the Fun Fur.
3) Knit one, make one, knit one, make one with the first two and last two stitches of the row.
4) Knit 2 rows.
5) Repeat steps 3 and 4 for about 5 times.
6) Knit 9 more rows (or until desired length) without increasing. My beard dropped down past my chin by about an inch.
7) Knit 14 stitches and then STOP. Now using another needle cast off the next 14 stitches and then knit the final 14 in this row.
REMEMBER to leave all your tails a little long until the very, very end! You will be using them later!!
~Side Burn #1~
With the last set of 14 stitches you knitted:
1) Knit 1, make 1, knit 1, make one, knit 8, knit 2together, knit 2together.
2) Knit a row.
3) Repeat steps 1 and 2 five more times.
4) Knit 10, knit 2together, knit 2together.
5) Knit a row.
6) Knit 8, knit 2together, knit 2together
7) Knit a row.
8) Knit 6, knit 2together, knit 2together.
9) Knit 18 rows (or again until desired length).
10) Cast off and weave in the end here.
~Side Burn #2~
Pick up the left over stitches on the other needle and from the “outside” of the beard and work your way in. From here the pattern is much the same as the one for the first side burn. Just remember to make sure you are knitting 2together on the “inside” of the sideburn and increasing on the “outside”.
~Mustache~
1) Set your beard aside and cast 30 stitches on to one of your your DPNs.
2) Knit 2 rows.
3) Begin this row by knitting 2 stitches, then do a yarn over and knit the next 2 stitches together. Knit the rest of the row regularly.
4) Knit 1 more row and then cast off. (leave the tail!)
Note: An adaptation of this would be to make the mustache completely removable from the beard by putting a Yarn Over at either end of the row and sewing 2 buttons onto the beard. It’s something to think about….
~Putting it all together~
Now take your yarn ends from the seam where one of the side burns meets the beard and use your yarn needle to sew the mustache and beard together on the side of the mustache WITHOUT the yarnover (for me this was the right side of the beard if I was wearing it on my face.) Tie off and weave in ALL your loose ends.
Sew in a brown or clear button for the mustache and clear buttons at the top of the sideburns so you can now attach your fuzzy friend to your favorite knitted hat!
Posted by Jess at 1:27 PM